Sent from my SGH-I337M using Tapatalk

Grooms said:
So is it absolutely freezing for anyone else today? I'm sitting at work in 5 layers of clothing.
Click to expand...

The lowest it's been here was in the 40s, and that's usually at night. I feel sorry for you guys so much. We've been getting warm, 70-80 Degrees sunny days here.

My resolution, believe it or not, is to spend more money on myself. I work hard, and deserve to treat myself more often then I actually do. Most people try to spend less money, but not in my case! 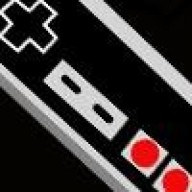 Azriel Delacroix said:
The lowest it's been here was in the 40s, and that's usually at night. I feel sorry for you guys so much. We've been getting warm, 70-80 Degrees sunny days here.
Click to expand...

I am quite jealous of you. Though I have a friend who lives in LA and he says the constantly sunny weather gets old after a while. He was excited to come home for the holidays and see snow (on the East Coast).

Verified Member
Yea, it's been 7 degrees today. Which is still cold & Azriel I wish I lived in such warm weather. xD

My resolution is to give up sweets. :G

Verified Member
I just finished Donkey Kong 64 for the first time today. Holy crap, the final boss was amazing. Friggin' long though. Takes about 20 minutes to beat him, and there's no checkpoints, which made it really tense.

Excellent game anyway, really long too. Took me 33 hours, and I've still only got 132 out of the 200 Golden Bananas!

Verified Member
Wow, 33 hours! Most people don't even spend that long on most modern games. Did you play it on an original N64 or did you use an emulator on your computer?

Verified Member
I used an original N64. My computer is pretty weak, and N64 emulation is a bit hit & miss too. I like collecting for older systems as well, so I didn't mind having to hunt down a second-hand copy online. For a game that long, it was worth the purchase!

Erik said:
Wow, 33 hours! Most people don't even spend that long on most modern games.
Click to expand...

You should my Fallout: New Vegas save file, I've clocked in over 90 Hours, about to hit 100 or so. I haven't even discovered all of the locations yet!

Azriel Delacroix said:
You should my Fallout: New Vegas save file, I've clocked in over 90 Hours, about to hit 100 or so. I haven't even discovered all of the locations yet!
Click to expand...

Well yeah, I have spend hundreds even a thousand hours on some games but they are newer ones and usually have a multiplayer component. For an older game like DK64 though I thought it was pretty insane!

Verified Member
Just found out that a Sly Cooper movie is coming out in 2016, right after the Ratchet & Clank movie. By the same company too, Rainmaker Entertainment. Seems like Sony is banking on Ratchet & Clank being a success.

The thing that's bugging me from the trailer is that it's done in CGI. Considering that the graphics in the Sly Cooper games are designed specifically to have the look of a comic book or a saturday morning cartoon, I was really hoping it would be hand drawn. Yeah, nearly every animated movie is CG now, but sometimes what's most technically impressive isn't what's most aesthetically pleasing, and I don't really feel this art direction captures the spirit of the Sly games as well as the Ratchet & Clank trailer did.

Still, I guess it has potential despite that. I don't want to judge too much based on one trailer, and I do love the Sly Cooper games, so it will be interesting to see where this goes. Here's the trailer if you're interested.


And for comparison's sake, here's the opening from Sly 2.

Verified Member
Hey, that is true that everything seems to be done in CGI. However things don't necessarily need to be hand drawn in order to have that cartoony look you are after. It is all just a matter of the computer animation method and style used. I tried doing some research but there doesn't seem to be much info about the production on this movie (my usual source - IMDB turned up nothing). At least Rainmaker entertainment will have experience working with Ratchet and Clank before this one is released.

Verified Member
Got something neat in the mail today!

It's a Super Famicom (the Japanese SNES) with Donkey Kong Country 3 (or as it's called in Japan, Super Donkey Kong 3). The console was $14 and the game was $6. Wasn't going to pass it up at that price! As you can see in the picture, the console is a yellowish color due to sunfading which probably contributed to the insanely low price, but that doesn't bother me too much, as it's still in excellent working condition. Been having a lot of fun with it this afternoon!

I've actually never owned a SNES before. Always wanted one but they're pretty rare and pricey over here in New Zealand due to SEGA being more popular at the time, meaning that now you'll have to pay at least $100 for the console alone. Donkey Kong Country 3 is pretty expensive here too, often going for around $60. Since the price was a bit daunting I decided to look around to alternatives and just getting a Super Famicom instead seemed like the best idea. I don't really mind playing games in Japanese, nearly all of my Saturn collection is made up of Japanese imports, and most of the SNES games I'm interested in are fairly straightforward platformers anyway so there won't be much of a language barrier. I may attempt a few RPGs if I can find some good translation guides though. I played the first MOTHER game in Japanese and still had fun with it, so I'd be willing to try it with other games. That, and of course this means I have access to the various Japan-only SNES games like Super Bomberman 4 & 5 and Ganbare Goemon 2, 3 and 4.

Verified Member
Don't forget all the japanese only horse racing games, and Snoopy Concert!
You must log in or register to reply here.
Similar threads